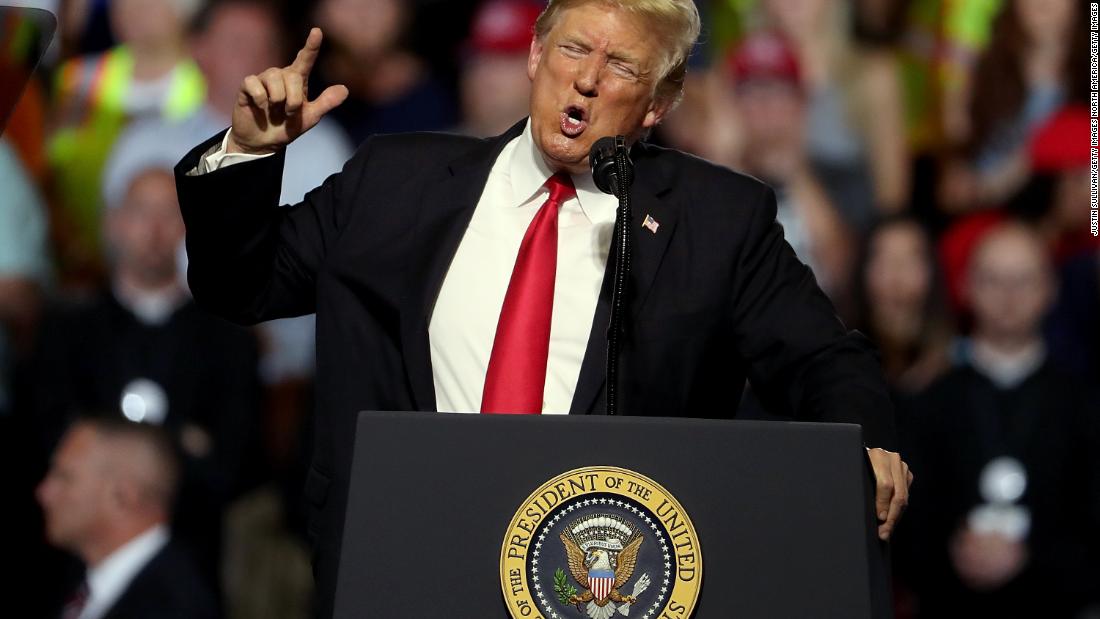 (CNN)During a Thursday night campaign rally in Montana, Donald Trump, the President of the United States, praised a Republican Congressman for assaulting a reporter.

“But Greg is smart. And by the way, never wrestle him. You understand that? Never.
Any guy that can do a body slam, he’s my kind of … He was my guy.
I shouldn’t say this, because — there’s nothing to be embarrassed about. So I was in Rome with a lot of the leaders from other countries talking about all sorts of things, and I heard about it. And we endorsed Greg very early, but I had heard that he body-slammed a reporter.
“And he was way up. And he was way up. And I said, oh, this was like the day of the election, or just before, and I said, oh, this is terrible, he’s going to lose the election. Then I said, well, wait a minute, I know Montana pretty well. I think it might help him. And it did!”

A bit of background: Gianforte, a wealthy businessman, was the GOP nominee running to replace Interior Secretary Ryan Zinke as Montana’s congressman in a May 2017 special election. Polling suggested Gianforte had a clear lead but the race was shaken up in its final 24 hours, literally, when audio emerged of Gianforte grabbing and body-slamming a political reporter for The Guardian named Ben Jacobs.
After initially suggesting Jacobs might have been to blame — despite all evidence to the contrary — Gianforte acknowledged he had acted inappropriately. He won the special election anyway. Within weeks, Gianforte had sent Jacobs a letter of apology and said he would plead “no contest” to a misdemeanor assault charge. He eventually pleaded guilty, and was sentenced to a 180-day deferred sentence, 40 hours of community service, 20 hours of anger management and a $300 fine.
What we have then is this: A reporter asked a Republican candidate (and now Republican member of Congress) about health care. The candidate assaulted him. No one disputes this chain of events. Gianforte pleaded guilty. He faced a suspended sentence and fines.
And this is the man, in Gianforte, who Trump praised on Thursday night with these words: “Any guy that can do a body slam, he’s my kind of … He was my guy.”
Trump undoubtedly viewed this line as a success because people laughed — always his measure of whether a barb worked. But, ask yourself this: What was the humor proposition here? What were people actually laughing at?
The answer is this: They were laughing at one person assaulting another. (Again, the assault is not up for debate; Gianforte pleaded guilty to doing it.) It is funny, theoretically, because the person on the wrong end of the assault is a reporter. Reporters, in Trump’s rhetoric, are loathsome, dishonest creatures — not capable of human emotions. And, feeling bad for them is the surest sign that you are a “snowflake” — one of those easily offended liberals who bow to the altar of political correctness and see everything as a potential trigger warning or outrage.

What all of that spin and, frankly, garbage, misses is that what Trump is doing — along with those who laugh when he does it — is dehumanizing reporters. These aren’t people like you and I, Trump is saying. They deserve to get beat up, to get assaulted, to get roughed up a little bit. They’re so bad and so dishonest, they don’t deserve the common courtesy that you would grant to someone you meet on the street. They aren’t like us. They’re other. And, therefore, we can do whatever we want to them.
Trump stood by his rally performance when asked whether he regretted his comments. “No. No. not at all,” Trump said Friday.
“He’s a great guy,” Trump said of Gianforte. “That was a tremendous success last night.”
All of which, on its own, is troubling. Very troubling. But, Trump’s celebration of an ASSAULT on a reporter — I just can’t emphasize this enough — is made even worse by the fact that the world is currently watching Istanbul where Washington Post journalist Jamal Khashoggi disappeared inside the Saudi Arabian consulate more than two weeks ago. The expectation — including from Trump himself — is that Khashoggi, a critic of the Saudi government, was killed inside the consulate.
The Saudi government had denied involvement and, to date, Trump has taken their word for it — noting that in his conversation with King Salman, “the King firmly denied any knowledge of it.”
The point here is that even as we are dealing with an international incident revolving around the near-certain murder of a journalist by a government that didn’t like what he said and wrote about them, the President of the United States is praising a member of Congress who assaulted a journalist for asking him questions.
“All Americans should recoil from the President’s praise for a violent assault on a reporter doing his Constitutionally protected job,” White House Correspondents Association president Olivier Knox said in a statement Friday.
I find it very hard to believe how anyone — even if you hate journalists and love President Trump — could fail to see the danger here. If you make reporters out to be deserving of being knocked around and assaulted, how big a leap is it until someone hears that as free license to do something far worse to a reporter?

People Are Posting Funny And Cute Photos Of Their Newfoundlands, And Its Crazy How Massive They Are