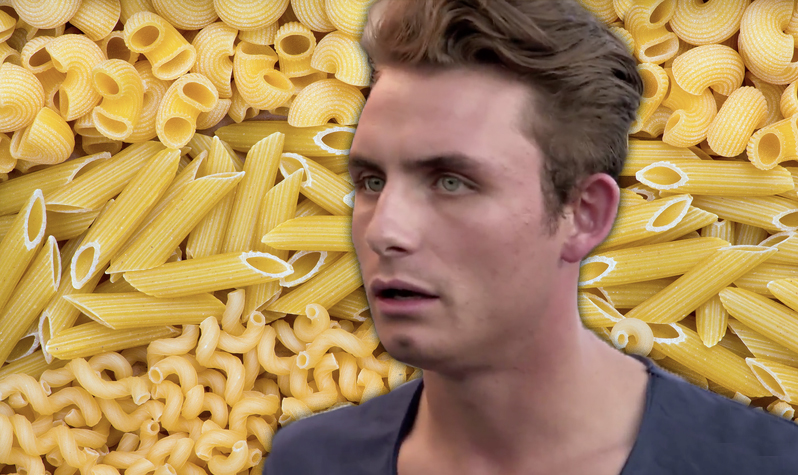 I’ll be real with you guys, I don’t have a fun or clever way to segue into this week’s episode, so I’ll just dive right in.

Actually no, let’s not dive in. I’m re-watching the tail end of last episode, and Jax is seriously the worst. Watching him gaslight Brittany again is making me homicidal. It makes me so sad and angry that Brittany is staying with him. Like, I understand that money might be tempting, but is it worth it for your mental health? *Googles how much these people make per episode*

We open this episode with Stassi at SUR picking out some outfits for the Pride Parade party, so I guess Bravo is still pretending that Stassi is a legit event planner. Do you think you can put “fake event planner, Bravo TV” on your resume?

Lisa: I need all the hands I can get during Pride, even Stassi’s grubby little mitts.

Unpopular opinion: I’m not sure how much I love Lisa anymore. She just finds any reason to be a bitch to people two decades younger than her. Why don’t you pick on someone your own age? Isn’t that what you have for?

Oh, Peter is into essential oils and Reiki? He just used the phrase “I have all my chakras aligned” in earnest? I have never lost my attraction to a person so fast, not even when they tell me they’re from New Jersey. For the inevitable commenter who asks, “I’m from Jersey, what’s your beef with my state?” may I kindly direct you to my previous recaps?

Why do I feel like Jax is going to scam on this Reiki healer in like, two episodes’ time?

I want the record to show I typed that before Sandoval said it. Thank you, thank you, that’s why they pay me the big bucks to write these recaps. Aka I get paid zero extra money for doing them; I just do it for the love of the game.

All the girls are getting Botox together. My friends and I just go to brunch, but okay.

Scheana is still sticking to the “My boyfriend couldn’t have kissed another girl, he doesn’t even make out with me” as a good argument. Honey, no. That’s not a good argument! That just means he isn’t into you.

Scheana: Can we just like stop talking about this and never speak of it again?

Stassi, Katie, Brittany and Kristen are at some cinema low-key trying to hook Brittany up with the waiter. They may be crazy bitches, but they’re good friends. But tbh I bet Jax is going to like, mentally fuck Brittany back to 1993 when he watches this exchange play out on camera and use it as retroactive justification for his cheating. Somebody please go check on Brittany and make sure she’s okay.

Meanwhile, James and Lala are at some restaurant that apparently sells Welch’s grape soda and gin. Snoop Dogg would be disgraced.

James: I’ve been trying to cut down the drinking

Also ALSO James: I could easily stop drinking at any time.

Hmm where have I heard that before? Oh right, 8th grade health class and every episode of ever.

Wait so Lala tells James that she ate Raquel’s pasta and now James is going full psycho like “Don’t fuck with my bitch, or I’ll fuck with your fat man and he’ll be onto his next pretty blonde.”

Lala is calmly trying to explain the joke about the pasta (which for the record I don’t think was funny to begin with so really this is all Lala’s fault) and it does not go well. Lala stands up for herself and storms out, and I don’t think James even remembers what he said to make her so mad a full two seconds ago. This is so fucking dumb. Is it about the pasta? Or is it not? SOMEBODY HELP ME!

And rinse and repeat for an hour until the screen fades to black and it says “Executive Producer Lisa Vanderpump.”

Just kidding, but I wish. *This joke has been brought to you by John Mulaney*

Back at SUR, Scheana confronts Ariana and Brittany to find out if Katie was talking shit about her. Oh my god, she’s so annoying. Just accept that other people are going to talk shit about you. Talking shit literally pays your bills.

Scheana 2 seconds later: OMG CAN WE STOP TALKING ABOUT THIS ALREADY *storms out*

Sandoval and Schwartz show up to the wreckage that is to be Tom Tom, because according to Sandoval, they’re putting in less money into their investment so they’re going to compensate with sweat equity. I feel like a better idea would be for you to just like, not compromise the structural integrity of this building with your dumb asses.

Anyone who says Kristen is reformed and sane now needs to take every seat as she describes how she literally tracks Carter’s every move via GPS while everybody else in the room just lets her drone on about her NSA-esque surveillance tactics without acknowledging her in any way.

Schwartz stayed over at Sandoval’s (a no-no) because he got too wasted (another no-no) and instead of starting a fight about it when he came home, Katie just let it go. Schwartz says “I feel like I fell in love with you all over again” because Katie lets him blow through her (very reasonable) boundaries with no consequences. God, I fucking hate men.

I don’t know why Lisa is volunteering to become Katie and Tom’s marriage counselor. “Not my circus, not my monkeys” – my favorite expression I found on the internet that I’d be employing the fuck out of in this situation.

Watching Kristen try to explain Pride is one of the funniest things I’ve ever seen. “We’re out here because love is love and to everyone who doesn’t think love is love, suck a dick.” Probs not the best turn of phrase to use in this context. I’m just saying.

Rob comes in to SUR and Scheana gives him the grand tour: “And here’s where I yelled at Brittany and Ariana, and here’s where I told everyone to stop talking about the rumors about you making out with someone.” But tell me more how you don’t want to talk about it ever again.

Scheana: I lost my smile this week.

At SUR, Stassi is telling the guys to put paint on their face. Sandoval is like “Oh hell yeah I’ve been practicing my contour for weeks now.”

Scheana hugs Lala and is 1) TALKING ABOUT THE RUMORS AGAIN *looks for something with which to fashion a noose out of* and 2) telling Lala Rob said “Don’t let anyone take your smile” which we all saw HER say. Scheana, what’s it like to live in another reality? Asking for a friend myself.

Okay but I’m not sure how I feel about Lala accusing Scheana of relapsing with her eating disorder, because like, that’s a sensitive topic and you shouldn’t just throw that around willy-nilly. And even if that is the case, IDK, I feel like there are certain lines you don’t cross, even for TV. But what do I know, I guess I’m just old fashioned.

Billie Lee gets up in the middle of pride to give a speech about being trans, and holy shit, this girl is brave. I will be quietly monitoring her Instagram comments for any trolls. If you wanna come for Billie, you’re gonna have to go through me. …An anonymous internet writer. YEAH.

So James body slammed on Jax’s crotch and now he’s almost making out with Logan while Raquel watches in the corner, horrified. Just saying, I called this from episode one. I just want James to be his authentic self, ya know?

Watching James buy Logan vodka Red Bulls and kiss him on the cheek while Raquel texts by herself in a corner reminds me a lot of how I’d watch my boyfriend and my roommate interact when we’d go out to bars together. Yep, you all thought I’d make it one episode without mentioning that dumpster fire of a relationship, but nope. Take a drink.

Lisa pulls Scheana aside from her job in the middle of THE BUSIEST DAY OF THE YEAR (a fact that annoys me but I should be used to it by now) to ask her how she’s doing. Scheana—you guessed it—brings up the “Rob making out with another girl” rumors. I’m just weeping to myself out of frustration at this point, for anyone at home who’s wondering.

Lisa: Even if this relationship doesn’t work out, it’s not the end of the world.

Scheana: Well it’s gonna work out because we’re meant to be together.

It must be exhausting being this delusional.

Scheana is definitely your friend who’s never been single and doesn’t know how to be. Scheana is Taylor Swift. Actually, that’s a pretty good think piece title. Coming soon to Betches. Someone comes up to Scheana and Rob and is like “What’s up?” and Scheana is like, “I got my smile back!!!” I’m so over this. I don’t ever wanna hear Scheana talk about her smile again, and if that means she never smiles, so be it.

Katie and Brittany come over to Brittany and Jax’s apartment. But first off, I am kind of weirded out by Kristen constantly saying Brittany is the best thing to happen to their group. Like, IDK, she just stans way too hard for these peripheral people, like Patrick. It’s just weird.

Brittany’s mom flew in to LA to surprise Brittany, and I just want to take the time to dissect Jax’s facial expression after learning that Sherry is in his apartment. 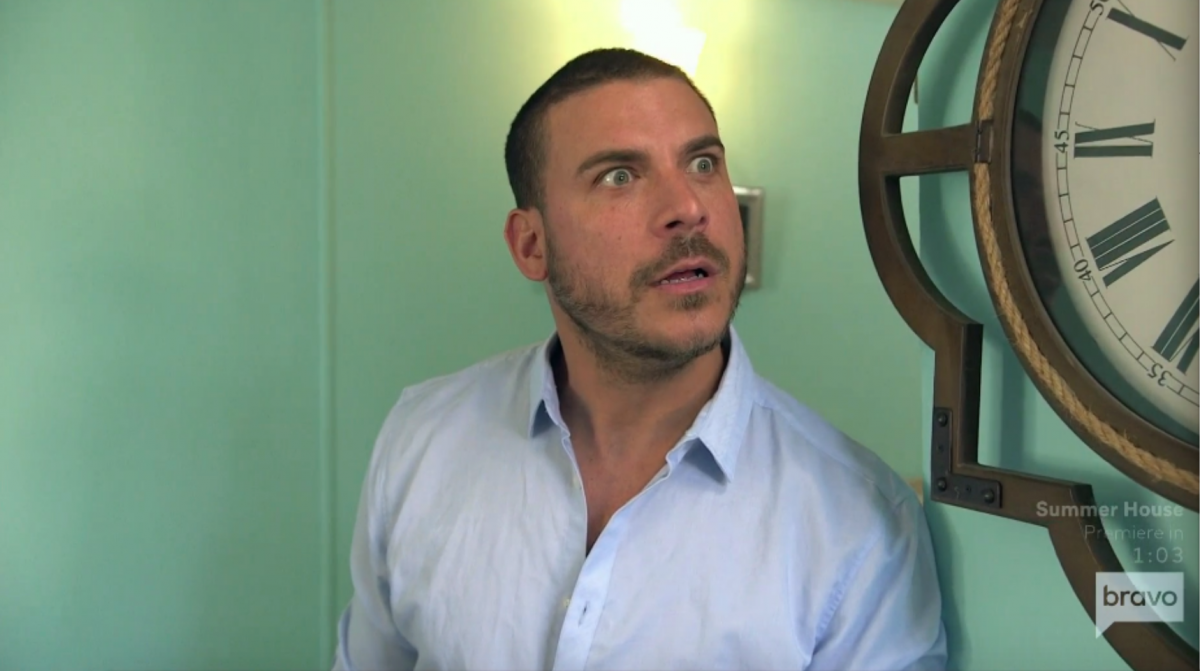 Okay, so I may not have captured it that well in this screenshot, but in the previews before the commercials, Jax was making this surprised face but if you looked closely (or are a psycho like me, hard to tell), he kind of looks a little bemused by the situation. Anyone? Or just me?

You all can debate the intricacies of Jax’s facial expression in the comments. Or not. Whatever. But somebody answer this? WAS IT ABOUT THE PASTA?

Alanis Morissette updated Ironic for todays problems and its hilarious.

When The Relatable Meme Is Funny But Hits One Of..

Is Jesus Coming Back? 8 Christian Leaders Weigh in on the Meaning of the Solar Eclipse