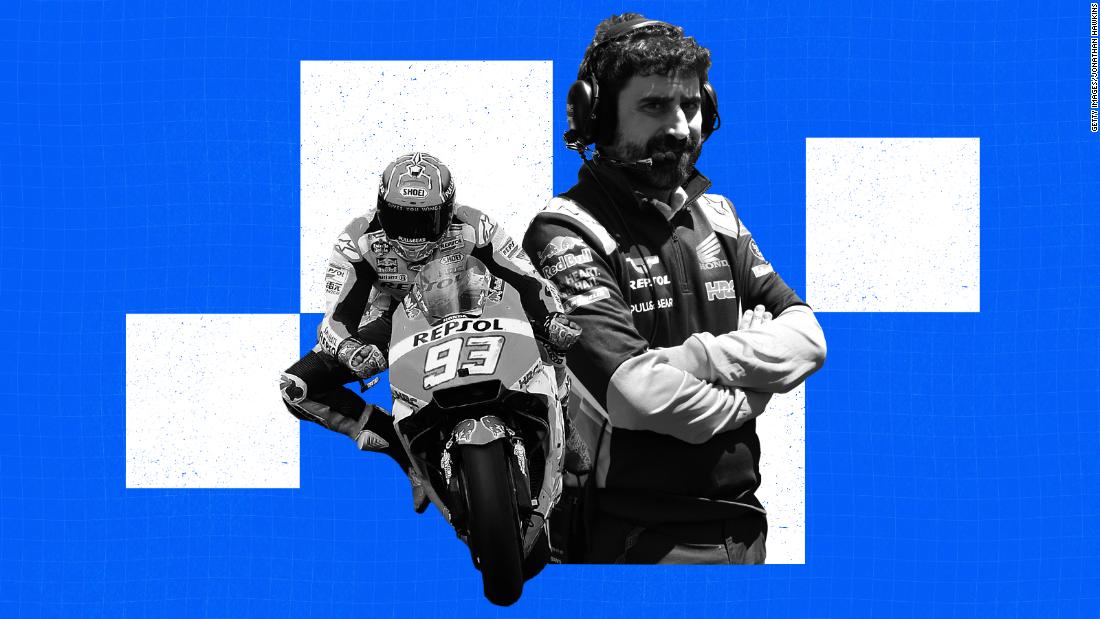 (CNN)He’s the cajoler and confidant of maybe the world’s greatest motorcycle racer. Less gray eminence perhaps — Santi Hernandez is mop-haired and bearded — but this man is an almost permanent fixture at the side of five-time MotoGP world champion Marc Marquez.

Throughout the 26-year-old Catalan’s time in the premier class, Hernandez has been his shadow. Watch any MotoGP weekend and the affable 44-year-old is there, clipboard in hand, whispering advice into Marquez’s ear and marshaling the intense activity in the garage around him. The two appear inseparable; friends with an unbreakable bond.
Marquez himself speaks with obvious affection for his fellow Spaniard. “I started to work with him in 2011,” the multiple champion tells CNN Sport. “Of course, in that time, there have been great moments, bad moments, but it’s like he’s not my chief mechanic, he’s my friend.”

But most friends don’t have to play the role of both good and bad cop as a world champion’s chief engineer.
“The thing is that you need to separate your personal relationship,” Hernandez tells CNN Sport.
“When I start, I don’t want to be friends with the rider, because this is a job, we’re in a professional world. Whether you’re a good friend or not, when you are with a champion, or any rider, they want the result.”
Personality counts for nothing, he says: “You can be nice, a funny guy, but at the end, if you are not doing your job well…”, Hernandez smiles, whistles and makes a gesture with his thumb, “you are out.”
The crew chief is generous enough to credit Marquez for the pair’s special bond.
“You can be with a rider for 10 years and never be a friend, the relationship is just professional. With Marc it’s different,” says Hernandez.
“But it’s not to say everything is right when we’re working; many times, we fight, many times we’re looking for what is the best way to do something, and many times we are not agreeing … but this is part of the job.” 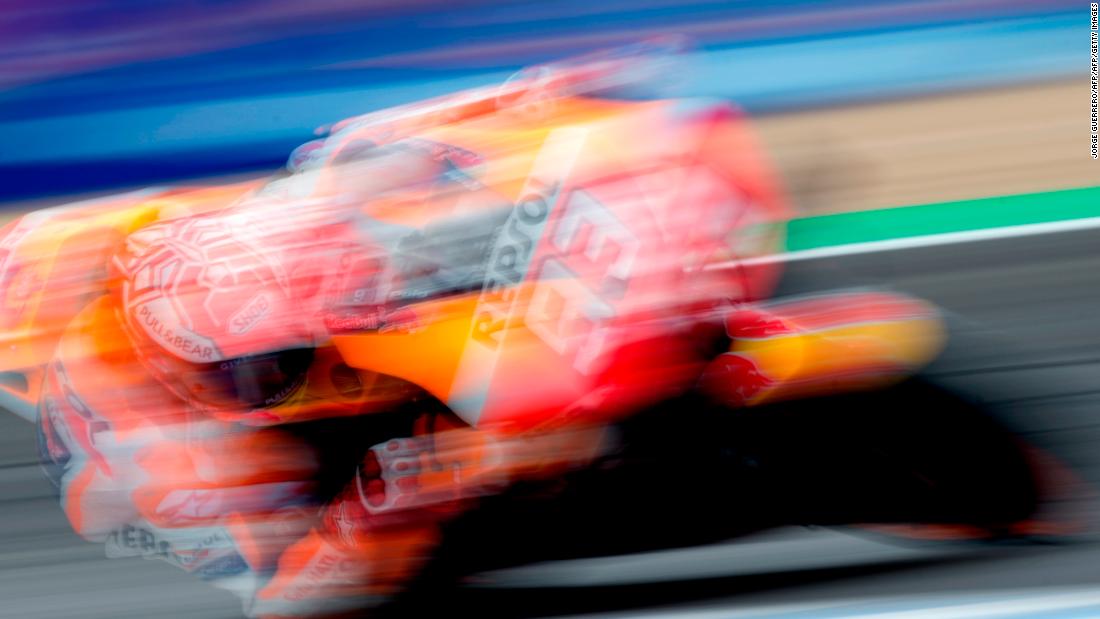 READ: Japan’s rising star could be its two-wheeled savior
Journalist David Emmett, one of the MotoGP paddock’s pre-eminent voices and editor of the influential MotoMatters site, has watched the relationship between Hernandez and Marquez blossom.
“It really is like a successful marriage,” Emmett told CNN Sport. “Marc trusts Santi, and Santi is open to Marc’s ideas. They spend hours every day poring over data, discussing ways of improving every aspect of racing, both at the track and at home.
“They win together, and they lose together, they accept both the praise and the blame together.” 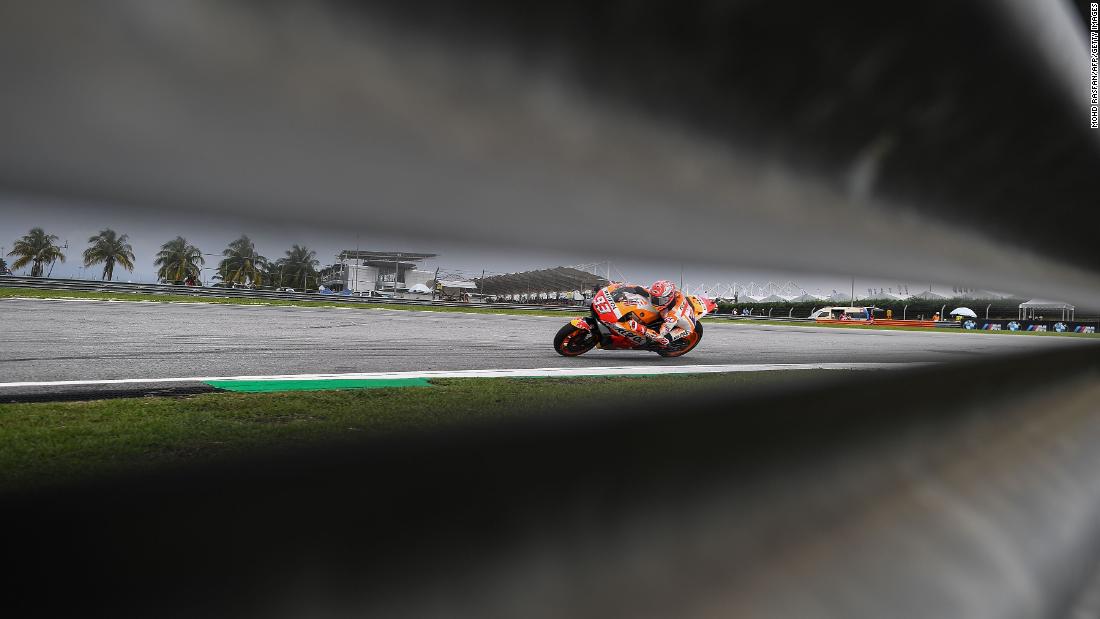 Hernandez was born into the world of engineering — his father worked as a mechanic — and he raced scooters as a child. His brother raced in the Spanish championship, but the young Hernandez was more interested in soccer than MotoGP. It’s noticeable how often he uses soccer as an analogy for his work.
Gradually he started to get the motorbike bug. Then as a teenager, he got a lucky break.
While studying to be a mechanic and working in a shop, an opportunity came up to work at legendary suspension manufacturer Showa.
“They needed a young guy for an apprenticeship, and to teach him about everything about suspension, and I was lucky that I knew some people working in the world championship, and they gave me the opportunity. And now, here I am.”
The MotoGP calendar is a slog. With 19 races across five continents, teams travel more than 76,000 miles (123 kilometers) over the course of a season. 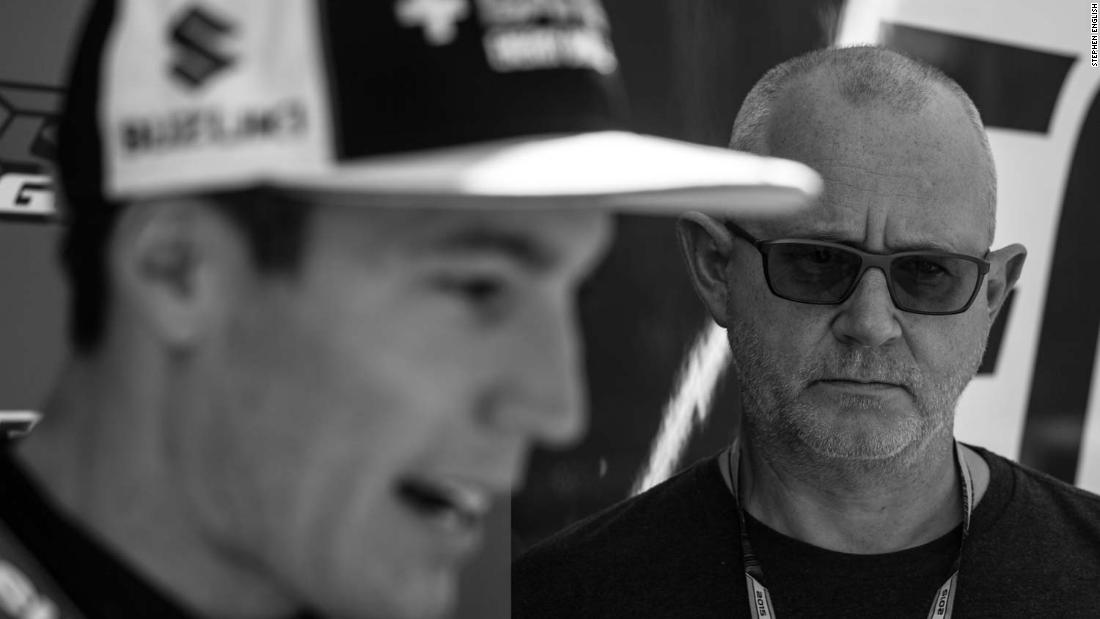 It is enough to put a strain on anyone, and Hernandez admits it can be hard.
“I have a daughter, she is living in London, I am in Barcelona; but it’s not only my daughter, I have my partner, my father, my brother, my uncles, the whole family, you need that.”
Between races the Barcelona-based Hernandez tries to make it home when he can, but it isn’t always possible.
“It depends: for example, the last three races of the season, in Asia, you go forward, because you are away for three weeks in a row,” he explains.
“Right now, I prefer to go home between races, even if it’s just for one week or five days. Of course, when I was younger, I would want to stay, because everything is new, but after 22 years, not so much.” 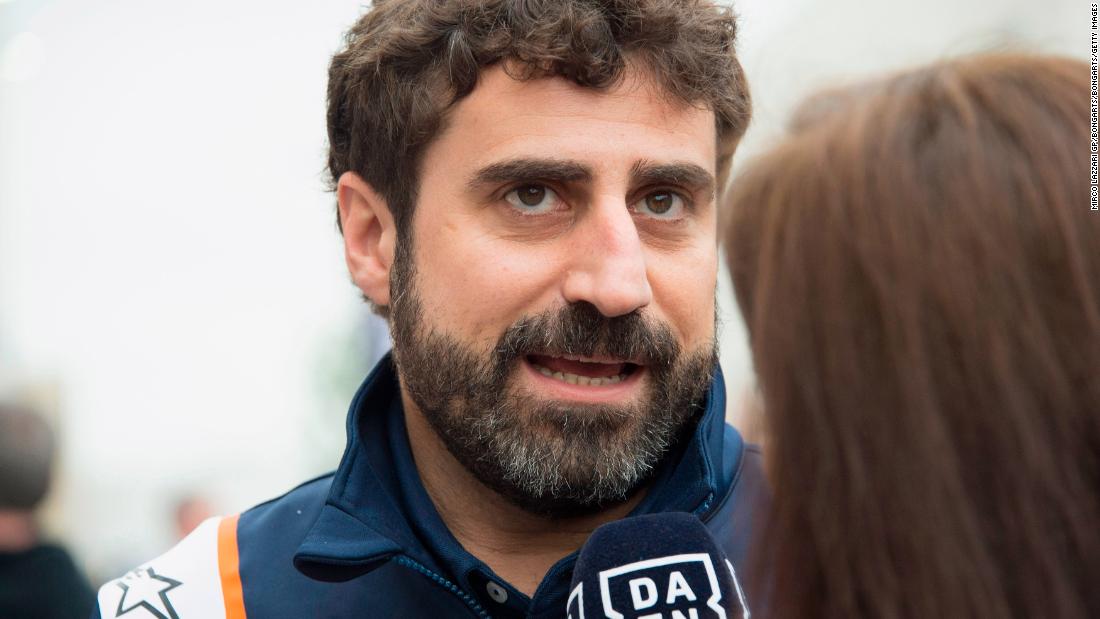 READ: The King of COTA is deposed

Even in the off-season, there is little respite.
There is a post-season test in November, an analysis of how the team has done to be conducted as well as briefing Japanese engineers in preparation for the next championship.
But, Hernandez says, rest is vital.
“It’s like the riders,” he says. “They have to stop, they cannot keep going in the gym, keep in the physical condition every day, because they need to also recover.
“Me too — you need to switch off, I mean, take two or three weeks, enjoy with the family, with friends, because this job is such a sacrifice, because you don’t do anything with friends of family, so for that reason, that time is very important to recharge the batteries.”
The Marquez era has been a golden one for Honda, and the manufacturer dominates the sport. But success, Hernandez explains, only increases the pressure.
“It’s like in soccer, when you are with a team that has to win the league, the championship, the European league, everything, if you win nothing it’s a disaster.
“Here it’s the same. When you are with a rider like Marc, every year you start the season thinking about winning the world championship, not to finish in the top five. Every time you don’t get your target, it’s not a good result.” 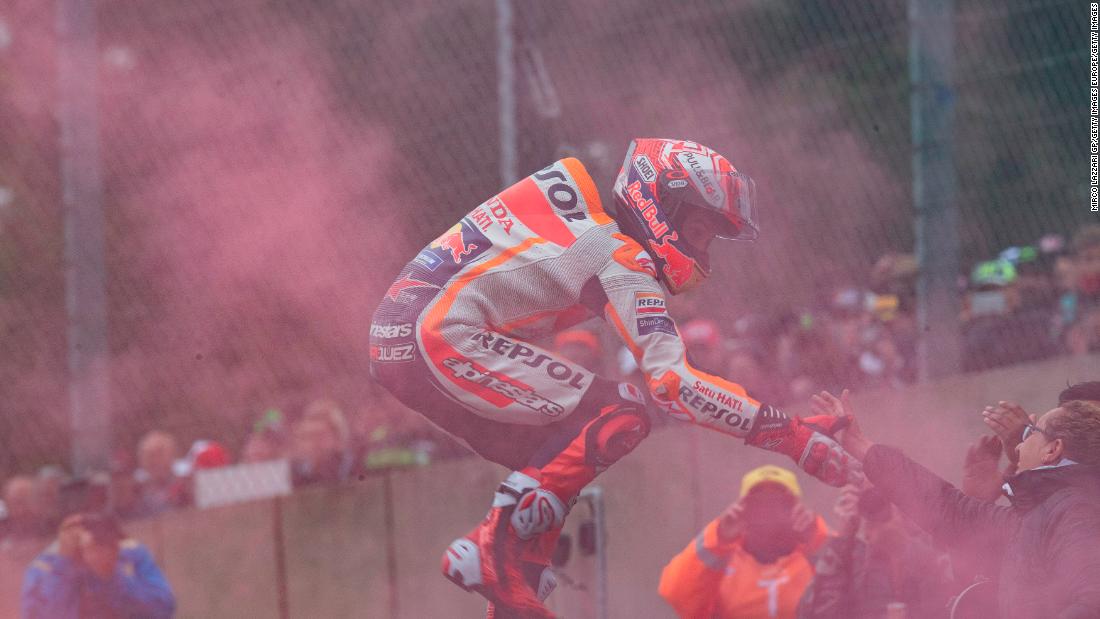 READ: From a roar to a whirr — MotoGP goes electric

The pressure to win

Hernandez believes seeing a result in context is vital after a race, but also says that pressure is important.
“Of course, after the race you have to look at the bigger picture, because many things can happen, maybe you finish third, but it’s quite good because maybe there are many crashes, or an injury, many things.
“But when you are with a rider like Marc, there’s one thing only: to win. But the moment I don’t feel that pressure, I have to go home, I cannot be here.”
Two-wheeled racing is, by its nature, heavily influenced by the weather. At April’s MotoGP of the Americas in Austin, teams were faced with wet, dry and windy conditions on different days.
So what happens when a crew is confronted with such a weather forecast?
“Well, yeah, you say ‘f***’, Hernandez laughs. “The thing is, the bike is never perfect. You always want to improve, improve, improve, and even if you have 10 days, you need one more.
“This is the same in a race weekend. If tomorrow maybe every session is in the wet, and Sunday is dry, you have only two sessions to make the bike set-up.
“You have to manage for the weather, and maybe sacrifice some things today to be ready, and focus on the biggest things, like the tires, the set-up of the bike, so okay maybe you don’t arrive in the best condition, but to have the best idea of what we can do on Sunday.” 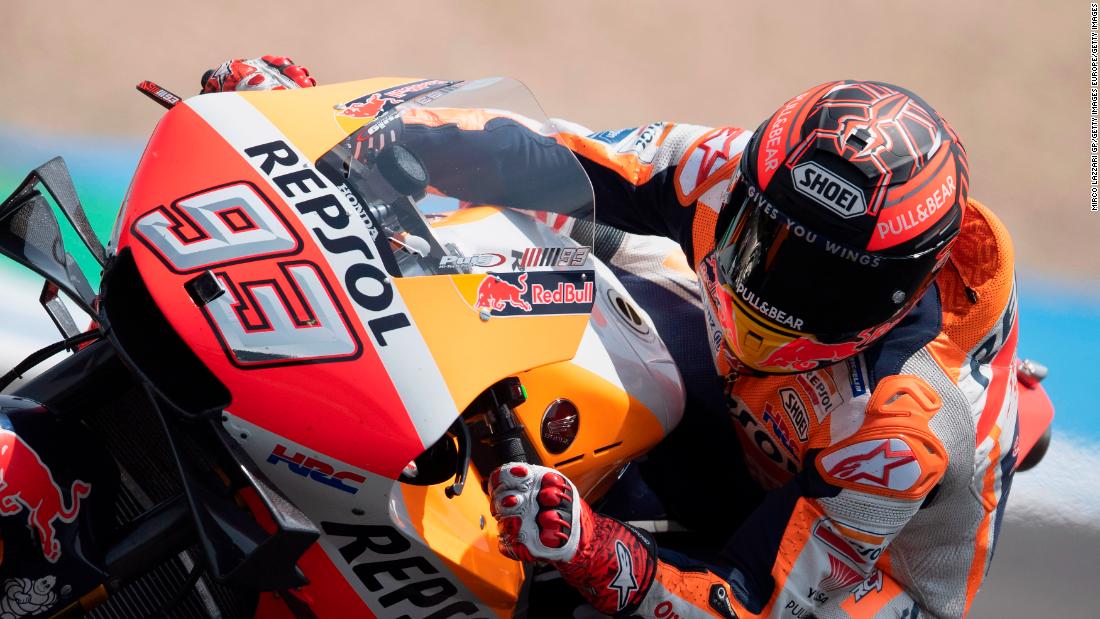 READ: Fire destroys entire fleet of electric bikes
In any race weekend, teamwork is key, Hernandez explains.
“My job, my position, is a little like the coach in soccer, but around the coach are many people, they are working very hard, and without that it is impossible.
“One guy like me is the face, but in that moment every mechanic is under pressure. They have to quickly assemble the bike, they cannot make a mistake. They have to prepare, or repair the bike, or change a tire at the last moment.”
The crew chief’s role is utterly crucial to a team’s potential success, according to Emmett.
“It is hard to overstate just how important Santi Hernandez’ role is. A great crew chief can listen to what the rider says about how the bike feels and responds and translate that into technical changes to make the bike faster. That demands trust, communication, and a very strong relationship.”
Marquez says the relationship goes beyond technology. “Of course, we speak about technical things but also he is helping me about mental things, about life, and that professional relationship becomes a very friendly relationship.” 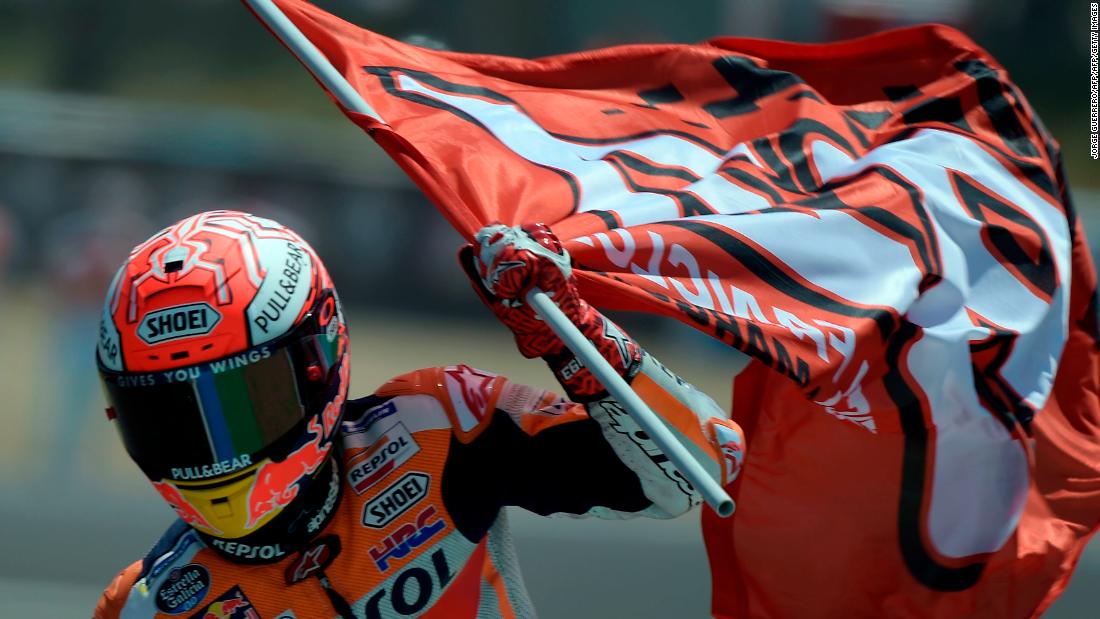 Hernandez cuts a distinctive figure in the MotoGP paddock, but — despite some gentle ribbing from Honda’s press officer during CNN Sport’s interview, he insists his fame is restricted to the track.
“In the circuit of course, I mean, the people who come to the track, they follow MotoGP, and if you follow Marc, or you follow other riders … you know the team … they come up to you,” he says.
“Then at home, maybe you go to a restaurant one time, and someone comes up to you and he’s watching MotoGP and he says ‘ah, you are working with Marc,’ and so on.
“I’m not the star, we are a team and we have to work in the same direction. It’s like I say, I’m the person who everybody knows, and people think I do everything. But without all the rest of the people, I mean the engineers in the back and many people, I’m nothing.” 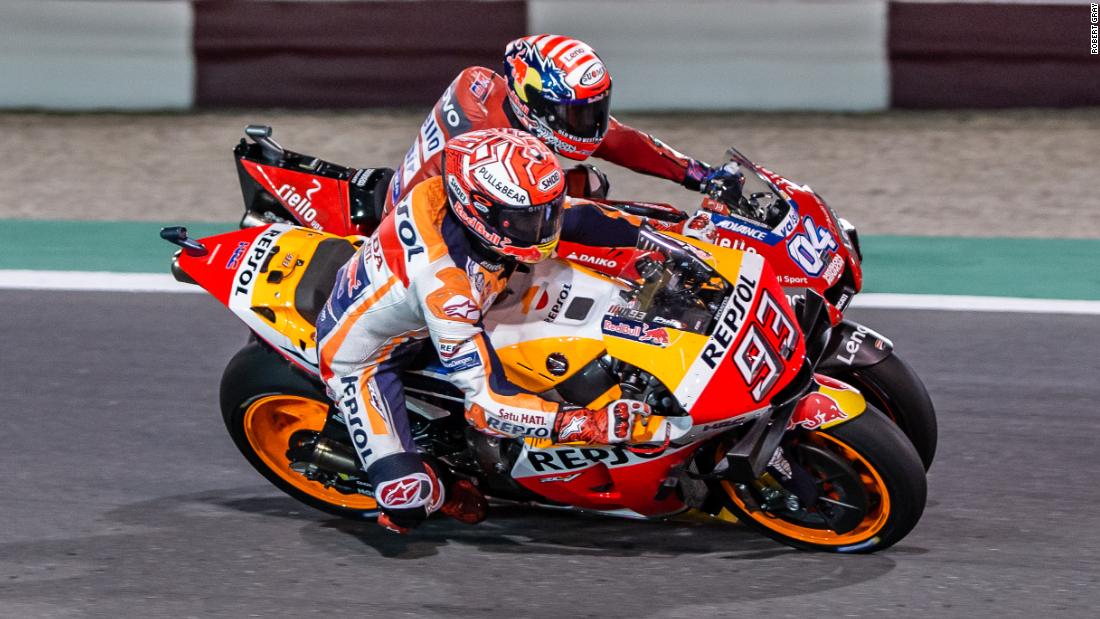 Even after 22 years in the paddock, and with a grueling schedule that would push anyone to the limit, Hernandez says life away from MotoGP is unthinkable.
“This is a drug,” he laughs. “I’m completely, how to say in English … addicted. Now it’s like I would have to go to the hospital to take that addiction. But for now, I don’t think of that.”
Whatever the future holds, Marquez tells CNN Sport the relationship with Hernandez will endure. “If now I stopped racing he will be one of my best friends in my life.”