The fearless Megan Rapinoe embodies the best of America

The funny, eloquent, insightful midfielder is the latest in a long line of USA womens players who have been unafraid to challenge the establishment 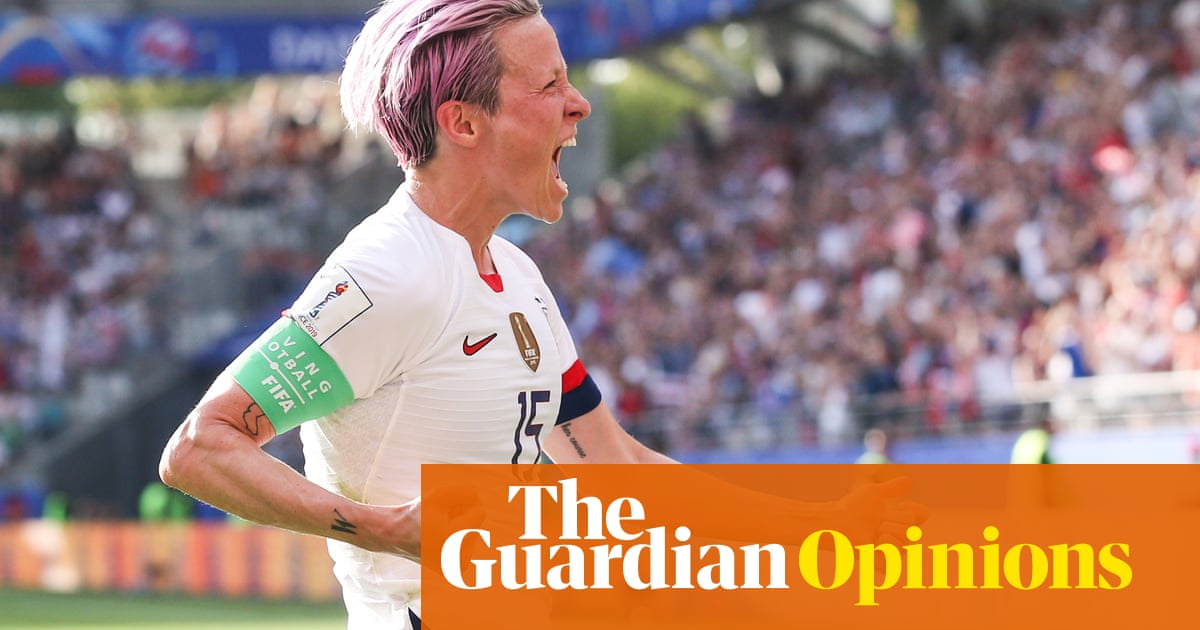 As the Star-Spangled Banner rang out on Tuesday in Reims before the USAs quarter-final tie with Spain, the TV cameras panned over the starting eleven, hands on hearts, singing in unison. And then there was Megan Rapinoe, silent and steely, standing because shes been told she has no other choice, a proud American with a point to prove.

In the gritty grind of a game that followed she was not at her best, yet she scored both USAs goals from the penalty spot, testament to both her talent and her composure. When things go wrong, you want Rapinoe on your team. And when things go right, shes often the driving force, the source of some of the sweetest crosses and most accurate corners ever witnessed in the sport.

It was a Rapinoe cross in the 2011 World Cup quarter-final with Brazil that Abby Wambach headed home, a goal that saved the USA womens team from the brink of elimination thats been called the greatest in the tournaments history. Her love for the game is evident in her every movement, and the unbridled joy of her celebrations.

It was through soccer that Rapinoe was first able to express herself and overcome the awkwardness she felt growing up gay in Redding, California. In 2012, she came out publicly in an interview with Out Magazine because she wanted to be an example, and to speak out against the prevailing homophobia in sports. In 2018, Rapinoe and her partner, WNBA star Sue Bird, became the first same sex couple to appear on the cover of ESPN the Magazines Body Issue.

Rapinoe is an irrepressible force, a fierce advocate for equality, funny, eloquent, insightful, as comfortable joking about her mothers predilection for pajamas as she is speaking at length on the subject of intersectionality.

Before the USAs friendly game with Thailand in September 2016, Rapinoe was the first white athlete to take a knee in support of Colin Kaepernick. In response to the backlash that followed, she told The Players Tribune, Im the same Megan Rapinoe youve known for years now one of the women you have called an American hero, and not just once. I havent experienced over-policing, racial profiling, police brutality or the sight of a family members body lying dead in the street. But I cannot stand idly by while there are people in this country who have had to deal with that kind of heartache.

Her actions were met with strong consternation from US Soccer, whose board voted unanimously to insist its players stand or face serious, though undisclosed, consequences. But for Rapinoe, protest and patriotism are deeply entwined.

Its really obvious that we have very serious inequality in this country across many different spectrums, she told the Guardian. Yes, we can talk about the form of protest, or the way its done, or this or that. But its still not really the conversation that I think we desperately need to have more of in this country.

This week a video of Rapinoe saying, Im not going to the fucking White House, did the viral rounds, prompting a customary dose of public condemnation from the US presidents Twitter account, and an invitation for her to refuse. It is, after all, still a free country and other high-profile athletes have refused to visit the Trump White House. When Steph Curry said he would refuse, the president issued a public revocation, curtailing the traditional championship-winning trip for the Golden State Warriors.

Rapinoe has that kind of clout, too. Already teammates Ali Krieger, Alex Morgan and Becky Sauerbrunn have spoken out in support of her, and been clear about their refusal to visit with an administration that Krieger described as engaged in a fight against LGBTQ+ citizens, immigrants & our most vulnerable, as has Wambach.

But the USA team was built by women who were unafraid to challenge the establishment. Since their first games in the mid-1980s, USA womens players have fought for every single amenity, from not playing in hand-me-down mens kits to being paid an actual wage. The 1999 World Cup-winning team not only helped found the worlds first professional womens soccer league, WUSA, but took a pay cut in order to keep it alive. The team is continuing its battle now with a legal challenge to insist on being paid as much as the mens team, given that they are more popular, more well-known and bring in more viewers and more revenue than their male counterparts.

As Rapinoe put it: I think our existence in professional sports is almost a protest in and of itself in the very sexist society that we live in.

If there is a player who embodies the spirit of this team and this generation, it is Rapinoe. She believes in those antiquated American ideals of truth, justice and equality. And shes not afraid of a total shitshow either.