Two months after we got married, Clark and I moved in with his grandmother, Mama Em. The university apartment complex we were living in (Clark had yet to graduate) allowed us to move out for the summer, so in order to save a few months’ worth of rent Clark thought, “Let’s live with my grandma!” And I was like <insert wide-eyed emoji and bride and groom emoji>.

We are grown-ups now. We are MARRIED now. We should be responsible for our own selves, not depend on family members. Stop mooching off of everyone else.

To which Clark replied, “It’s not mooching. It’s helping each other out. Stop being prideful.”

Then, there’s this irritating fact that he requires very little to function joyfully. He never packs a suitcase when we visit his parents. Instead, he just digs through whatever clothes were left from high school and uses the extra toothbrushes in the guest bath.

I recall a particularly ridiculous Sunday get-up consisting of high-water Tommy Hilfiger tapered jeans, chunky brown loafers circa 1997, and a faded striped Nautica shirt two sizes too small. But he rocked that outfit like he was still 16 (and not a full-fledged 26)—with zero shame. I applauded his confidence from a safe distance across the church auditorium. 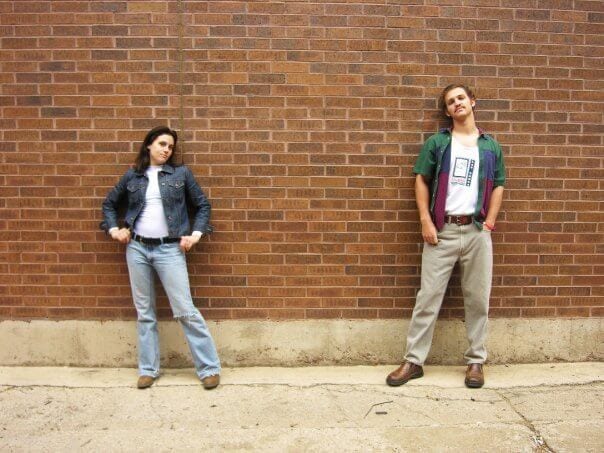 This is not the actual outfit but just imagine something embarrassingly similar. (This photo was part of the fake engagement shoot we took long before we started adulting.)

What I call “mooching” he calls “community.” In his mind, that’s what people do. We take care of each other. We help each other. Give and take.

As I’ve watched him throughout the years, this belief in mutual dependence that once made me feel awkward, guilty, uncomfortable, embarrassed, etc. became something of a sociological experiment. I found that relationships thrive when others feel helpful. They feel needed, important, valued. I realized my tendency to “be responsible for myself” was actually individualistic, prideful, and isolating.

Where I tend to just handle all.the.things out of fear of bothering or smothering others, or just plain not wanting to surrender, Clark’s the first to reach out and say, “Hey friend, I have a favor to ask,” which gives him this uncanny ability to have deep relationships within a matter of minutes. It takes me years.

A couple of years ago, God began a slow work in me.

I was overwhelmed. I had three tiny people who  required all of me and left trails of you-name-it wherever they went. We were renting a 2,100 square foot house that was filled to the brim with stuff, most of which I didn’t even like.

My house was decorated with hand-me-downs from other relatives, dead or alive, and things I’d registered for pre-Pinterest and therefore pre-I-know-what-I-like-and-how-I-want-it-to-look. And I was DROWNING in housework even though my mom and MIL, God bless them forever and ever amen, paid for my house to be cleaned once a month (if you’re in need of a baby shower gift idea, that’d be the one).

So after reading a few books*, watching a few documentaries**, and sitting at the feet of friends a lot more like Jesus than me, I began feeling pulled toward SIMPLE.

When we realized we were moving, we decided to take advantage of the opportunity to easily downsize and simplify. While Clark was all LET’S GET RID OF EVERYTHING AND MOVE INTO A TINY HOME I was more I’M AT HOME BY MYSELF ALL DAY WITH THREE CHILDREN AND NEED TOYS AND PERSONAL SPACE.

So that’s where we started.

We compromised on anywhere from 1,300-1,600 square feet. And funny how it turned out… that’s all we could afford in the area anyway. Boo-yah. (Eventually, I’ll get into the WHY behind all this… but holy long-winded blog post, I’ll wait for that.)

We were brutally picky on what we kept and what we didn’t. I got rid of almost all my decor. If I didn’t love it, need it, pine for it, it was out. We were working towards quality and away from quantity: a few things we loved rather than a bunch of stuff we tolerated. We combed through every closet and drawer and crevice. Bedsheets. Pots and pans. Pens. Books. Files. Magnets. Toys. We left nothing untouched. And packed nothing we couldn’t live without.

Then, we had a garage sale and I burned up Facebook Marketplace selling all the big items I didn’t like and buying a few pieces I did. However, I was careful not to just replace for the sake of replacing. I didn’t buy anything I didn’t absolutely adore.

Which brings us to today. We now live in 1,500 square feet of ORDER. There is order in my life for the first time in … ever? Tidiness and organization are suddenly effortless. Everything has a spot AND its spot is nearby. I can stand in the middle of the house and be mere feet from every other room. There’s a toy in the middle of the living room? Oh! I can just toss it into the playroom a few feet away. Hattie’s shoe is under the couch? Well, let me just hop over to the girls’ room and put it in her drawer. It’s not a whole night affair. I’m not jogging up and down stairs or hiking from one end of the house to the other.

Add that to the fact that there’s less stuff to fill the smaller space and I now feel so much lighter. Nothing is stuffed. Or stacked up high. Or wadded up. Or shoved in. There’s room for everything.

As lame and cheesy as this sounds, I feel free. Like all that stuff I’d been picking up and piling up was actually burying me.

Most importantly, I feel more hospitable because having people over isn’t nearly the chore it once was.

Which brings us back to the beginning.

Having less stuff does cause one problem: I will probably have to depend on others a bit. I will now have to borrow someone else’s ski jacket if I ever go skiing. And now that we don’t have cable, we may have to go watch a game at someone else’s house once in a while. Which probably means we should go make some new friends here. Yikes. 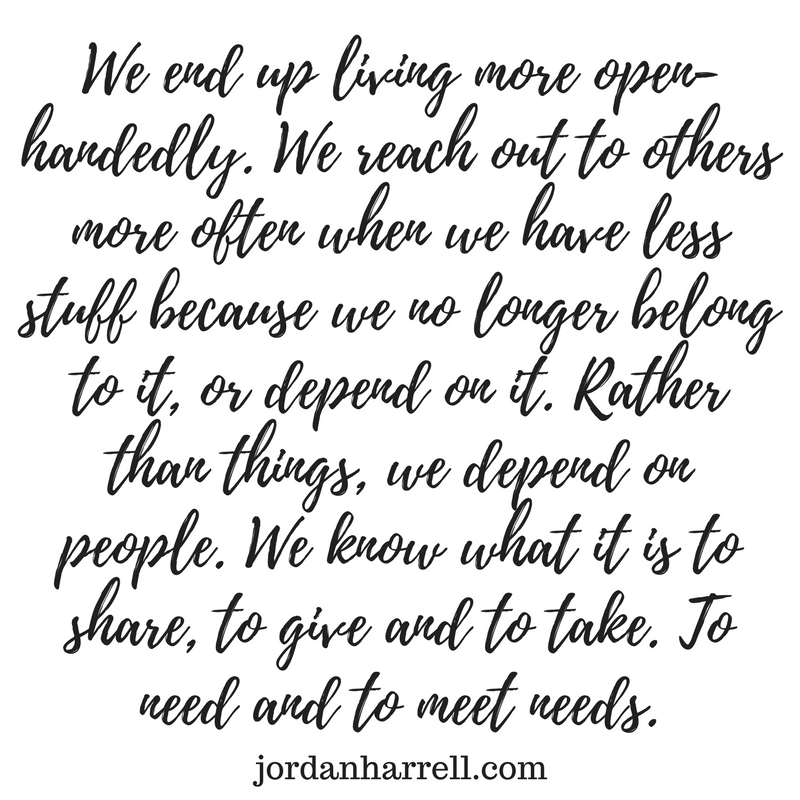 But isn’t that the beauty of it? We end up living more open-handedly. We reach out to others more often when we have less stuff because we no longer belong to it, or depend on it. Rather than things, we depend on people. We know what it is to share, to give and to take. To need and to meet needs.

Gosh. I hate it when he’s right.

* The books I read were:

The Life-Changing Magic of Tidying Up by Marie Kondo

Raising Grateful Kids in An Entitled World by Kristen Welch

** The documentaries I watched were:

Inside the Mind of Amanda Feilding, Countess of Psychedelic Science

She Laughed So Hard During Funny Movies...

Why You Probably Need a Little ‘Sexy McSexFace’ in Your Marriage

If America can find $716bn for the military, it can fund the Green New Deal | Rev William Barber and Phyllis Bennis

35 Psychological Tricks To Effectively Manipulate Any Situation Youre In

Some Of These Are Actually Really Funny