How ‘thoughts and prayers’ went from common condolence to cynical meme 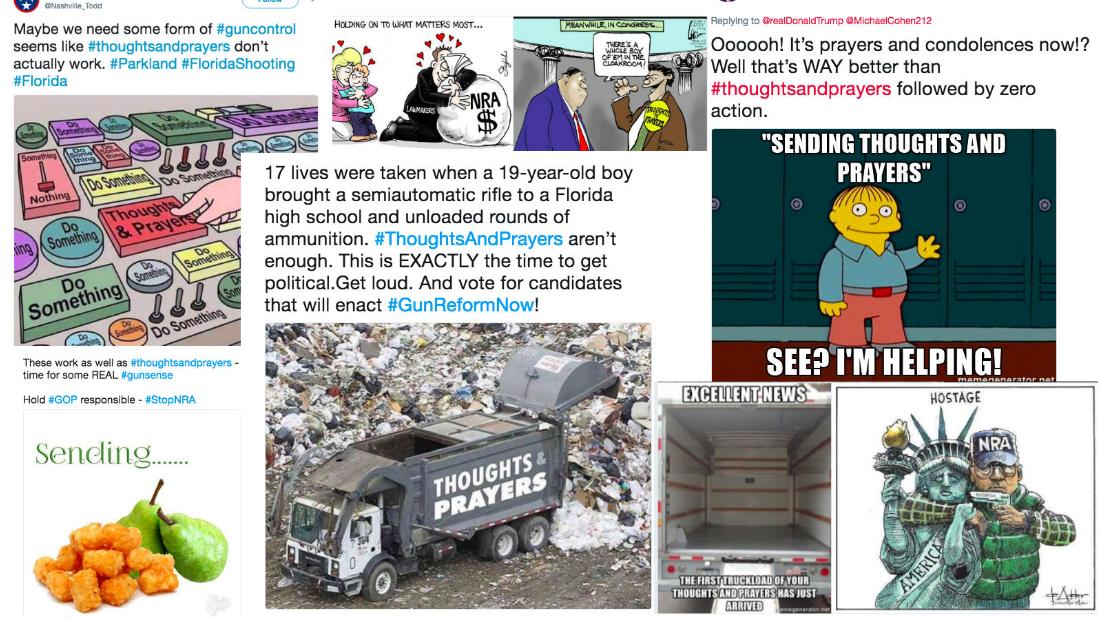 (CNN)Semantic satiation is the phenomenon in which a word or phrase is repeated so often it loses its meaning. But it also becomes something ridiculous, a jumble of letters that feels alien on the tongue and reads like gibberish on paper.

For the last few years, after every mass shooting, the term immediately trends on social platforms. It’s not a good kind of trending: Among the earnest pleas for social and legislative action, the aftermath of each successive shooting inspires more and more memes and cynical jokes.
In one highly-shared image that circulated after the Marjory Stoneman Douglas shooting in February, “Thoughts and Prayers” is imprinted on the side of a garbage truck. Another meme shows an empty van. “Excellent news,” it reads. “The first truckload of your thoughts and prayers has just arrived.”
Jokes, mere hours after a deadly shooting? To the voices behind the dark humor, the persistence of “thoughts and prayers” is the real joke.

Why people don’t take it seriously

The repetition of “thoughts and prayers” is a product of the repetition of mass shootings. And to #ThoughtsAndPrayers critics, the repetition of mass shootings exists because no one is doing much else besides offering thoughts and prayers.
There has been no major gun-control legislation in the nearly six years since Sandy Hook, the tragedy that was supposed to change everything. In fact, in the years following Sandy Hook, more states loosened gun buying restrictions than tightened them.
Politicians like Paul Ryan, Marco Rubio and even President Donald Trump were taken to task for their “thoughts and prayers” messages after the Parkland shooting. All have staunch pro-gun stances and financial ties to the NRA. 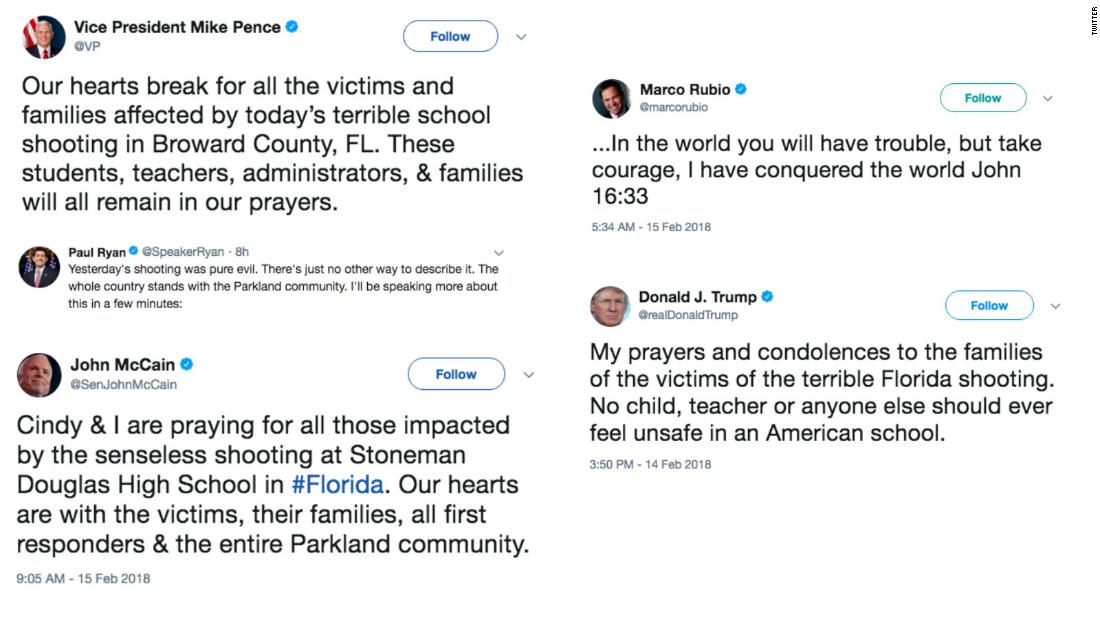 In May, a teenager shot and killed 10 people at Santa Fe High School near Houston, Texas. Just days after the tragedy, Houston Police Chief Art Acevedo had desperate words for people who were content to remain inactive on gun control reform.
“This isn’t a time for prayers, and study and inaction,” he wrote in a Facebook post, “it’s a time for prayers, action and the asking of God’s forgiveness for our inaction (especially the elected officials that ran to the cameras today, acted in a solemn manner, called for prayers, and will once again do absolutely nothing).”
After the Las Vegas shooting last October, Connecticut Senator Chris Murphy called out the phrase’s odd and complicated role in the cycle of mass shootings, grief and inaction.
“It is positively infuriating that my colleagues in Congress are so afraid of the gun industry that they pretend there aren’t public policy responses to this epidemic,” he said in a statement. “There are, and the thoughts and prayers of politicians are cruelly hollow if they are paired with continued legislative indifference.”

The dark humor of “thoughts and prayers”

The devolution of “thoughts and prayers”-like sentiment has been years in the making.
The further it’s embedded in our post-tragedy lexicon, the more it’s mocked as a form of civilian slacktivism, and more recently as a form of political obfuscation.
A chart of Google queries shows that the phrase spikes during natural disasters and mass shootings. Between those incidents, the interest in, and familiarity with, “thoughts and prayers” has risen steadily over time.
Comedian Anthony Jeselnik was one of the first to publicly make fun of the phrase. In his 2015 “Thoughts and Prayers” routine, he references the 2012 Aurora, Colorado, movie-theater shooting and the 2013 Boston Marathon bombing as occasions for faux concern.
Of thoughts and prayers, he says: “Do you know what that’s worth? F***** nothing. F***** less than nothing. You are not giving any of your time, your money or even your compassion.”
The audience roars and claps.
After the Orlando nightclub shooting in June 2016, video game developer Mike Lacher made a “Thoughts and Prayers” 8-bit video game. In it, you try to prevent mass shootings by pressing buttons that say “think” and “pray.” If you press a button that says “ban assault weapon sales,” you’re rejected.
“Weak!” the game screen reads. “UnAmerican!” “Pray harder!” 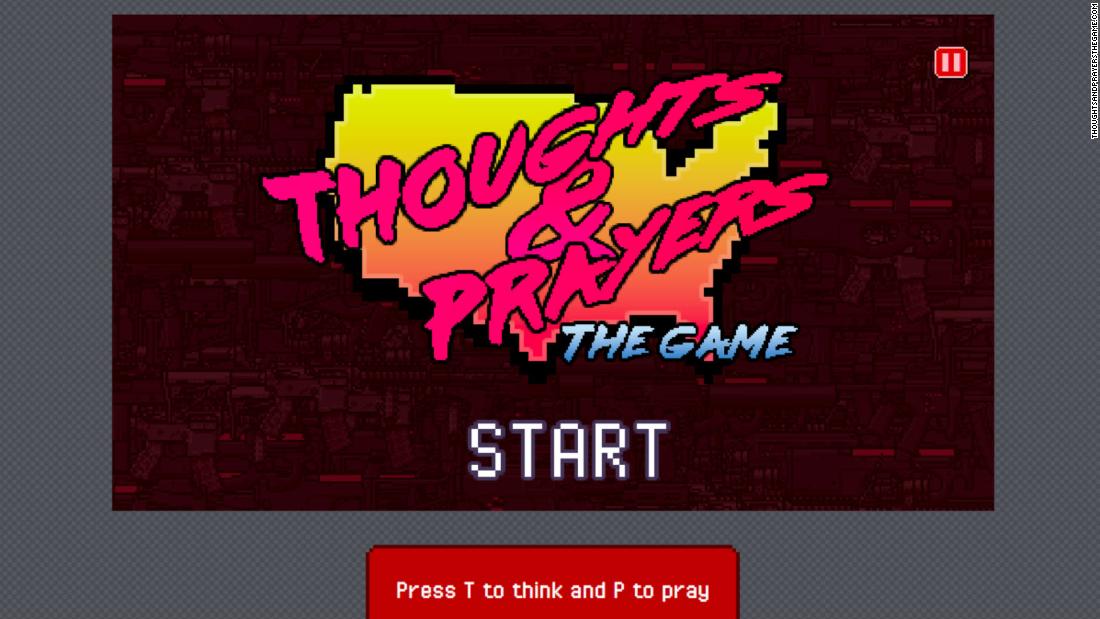 A 2017 episode of “BoJack Horseman,” an animated Netflix comedy about an anthropomorphic horse, is titled “Thoughts and Prayers.” In the episode some characters scramble to respond appropriately to a mass shooting while continuing to market a movie glorifying gun violence.As more mass shootings occur, the hypocrisy of acknowledging reality with “thoughts and prayers” while trying to sell a gun-flavored fantasy becomes more and more pronounced.
The phrase has gone from sincere to funny, but not in a ha-ha way. It is political commentary. In the hours and days after a shooting, it can be undistilled frustration and grief coming out sideways, sometimes as a bitter chuckle and other times as a desperate shout.
After 14 civil servants were killed in a December 2015 shooting in the San Bernardino, the New York Daily News, known for its bold, attention-grabbing headlines, ditched the wordplay.
“GOD ISN’T FIXING THIS,” the headline screamed, along with the #ThoughtsAndPrayers tweets of Republican leaders Ted Cruz, Lindsey Graham, Rand Paul and Paul Ryan. 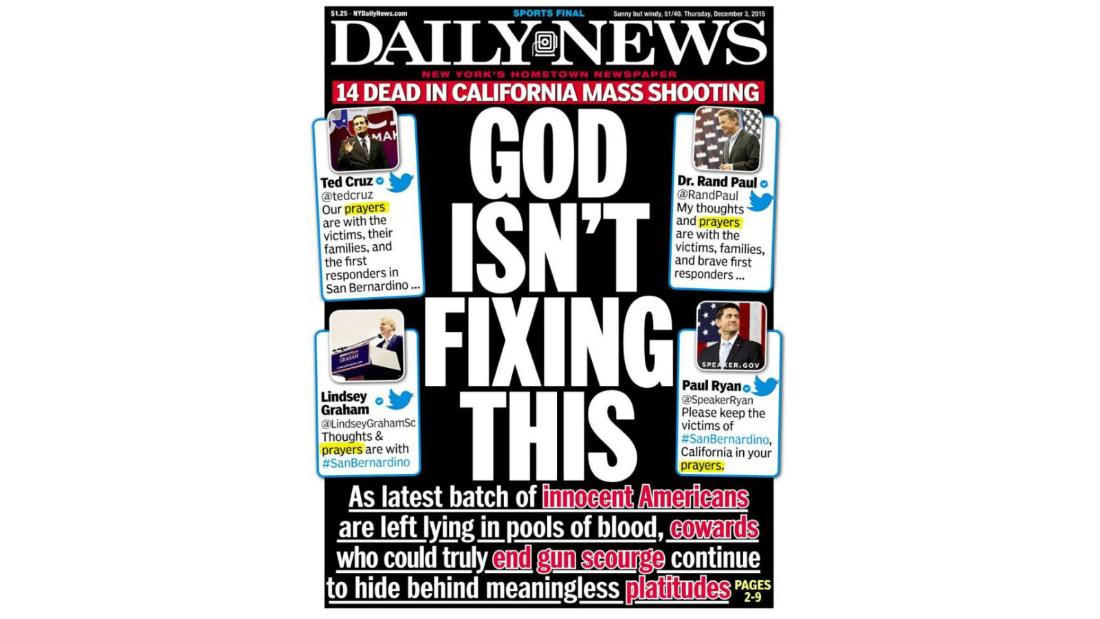 Figuring out when it matters

So when should #ThoughtsAndPrayers be taken seriously? Religious thinkers and leaders have sought to reclaim the phrase, seeing how rapidly its meaning devolves every time it is trotted out — and subsequently ridiculed — during every tragedy of gun violence.
Days before the Florida high school shooting, the Dalai Lama tweeted, “Although I am a Buddhist monk, I am skeptical that prayers alone will achieve world peace. We need instead to be enthusiastic and self-confident in taking action.”
And Pope Francis has regularly called his followers to intertwine their prayer and works.
“Prayer that doesn’t lead to concrete action toward our brothers is a fruitless and incomplete prayer,” he said in 2013. “Prayer and action must always be profoundly united.”
When even religious leaders appear to be questioning the real value of #ThoughtsAndPrayers,it can be hard to place your faith in it.
It begins to feel empty. It begins to feel reflexive, dismissive. And maybe even funny.
Just not in a ha-ha way.