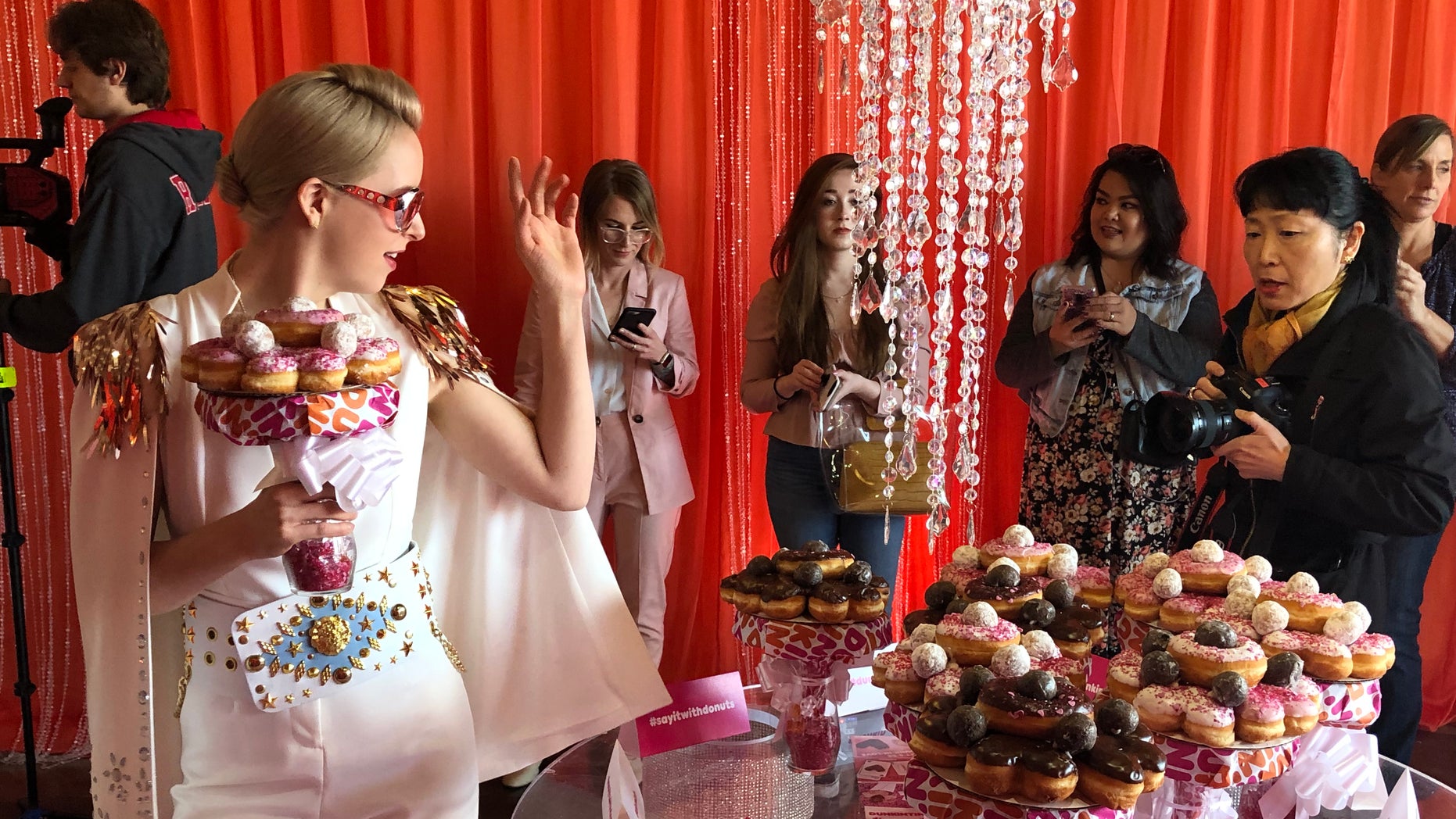 Dunkin’ decked out a wedding chapel in las Vegas Wednesday afternoon to offer coffee lovers the chance to get married surrounded by their favorite treats — and a doughnut bouquet. (Ben Brown / Fox News)

Tying the knot just got a little sweeter.

With Valentine’s Day just around the corner, Dunkin’ took over a wedding chapel Wednesday afternoon in Las Vegas, offering lovebirds the chance to get hitched alongside their favorite treats.

Sure Thing, a wedding chapel by Flora Pop, was decked out with Dunkin’-themed decorations and an Elvis officiant who invoked many coffee and doughnut references throughout the ceremony.

“This ceremony we don’t say “I Do,” we say “I Dough,” the Elvis impersonator explained to Erin and Jason Roberts, who were renewing their vows.

“I actually follow the chapel on Instagram, and they advertised about it and I was like, ‘You know what, let’s do it!’” Erin Roberts said. “I like doughnuts, so we never really had a ceremony, I was pregnant and I was like let’s just go do it!”

If renewing your vows or saying “I Dough” for the first time in a wedding chapel converted into your neighborhood coffee shop isn’t enough, the first 100 couples were also given a bouquet made entirely out of doughnuts.

“What better way to say I love you than with a bouquet of doughnuts? We’re really excited to be here to help our fans celebrate Valentine’s Day and many couples to get married or renew their vows,” Dunkin’ spokesman Justin Drake told Fox News.

Rick Golden, manager of doughnut excellence at Dunkin’, said the doughnut bouquets “took about a week to develop” with the help of a team of “about five or six.”

Coffee lovers were also greeted by a special guest, Andy Grammer, who serenaded the couples as they walked down the aisle.

“I just kind of organically had done something with my fans where I had been texting them to meet-up for doughnuts in different cities all across the country — so we’ve done Orlando, New York, Boston and different places — so to get to do it in Las Vegas and do it this big is really special,” Grammer told Fox News.

Josh and Penny James, who were both wearing doughnut-themed outfits, were excited to renew their vows surrounded by their favorite treats as they try to reach a rather peculiar goal.

“We’re going for the renewal record,” Penny James said, noting that this is their 18th time reaffirming each other’s love.

And whether it renewing your vows for the first time, or the 18th time – there was no doubting their passion for coffee and doughnuts.

“We thought it would be funny, but I love Dunkin’ Donuts as well. But, we just love each other so we’re always down to do spontaneous things together,” newlyweds Paige and James Davidson told Fox News.

Benjamin Brown joined Fox News in 2016 and currently serves a multimedia reporter based in Las Vegas.