An Open Letter to the Senator Who Said Nurses Play Cards All Day, From a Hangry ICU Nurse

Recent erroneous and poorly thought-out comments by you concerning how nurses spend their “breaks” made me aware that a public service announcement was needed. An informative letter, so to speak, inviting you into my little world as an ICU nurse. Don’t worry about finding a seat. You won’t be here long enough. In the infamous words of Jack Nicholson, you can’t handle the truth.

So without further ado, allow me to tell you about a recent shift I worked.

I took a break. I did, I’ll admit it. You’re right, but there were no cards.

I got lunch [at] about 3:45 p.m., and I was grateful for it. You see, I didn’t think I’d get lunch. I had resigned myself to that fact, and my plan was to throw some Saltines down my gullet while I took my one potty break. I mean, it probably wasn’t the most hygienic, but it beat passing out. I did get a lunch though! My charge nurse made me take it.

I had planned to eat earlier than 4:00 p.m. Not having had breakfast, I hadn’t eaten since the night before. I’ve heard of this new diet trend called Intermittent Fasting. It’s supposed to be great for weight loss. Basically, you go 12-15 hours without eating. Heck, I don’t know why this is such a groundbreaking thing nowadays. Isn’t this simply #nurselife? My OBGYN asked me in December how I maintained my slim frame after three kids and being in my [40s]. I told him I didn’t know, but now I guess I should have just said it’s The Nurse Diet. As it was this particular shift, over 18 hours had gone by before I put any calories in my body. Go me. But I digress.

I was saying that I wanted to eat earlier. I did. I love food. Lunch is my jam, and I had tried to leave right at [11]. The plan was to run down real quick before I discharged a post-op patient. Because I knew once that bed was empty, another far more sickly patient would take its place. That’s just how the cookie crumbles.

Nope, no cookies or even a coke at [11]. The doctor wanted to try and extubate my other patient. For the layman, like yourself, who apparently knows enough to know how I spend my break, but may not understand medical terms, extubate means remove the tube that has been breathing for the patient. And you know, it takes breathing to survive, so it’s kinda a big deal.

I had to wean down some pretty dangerous medications. I do that a lot. I hold in my little fingertip the ability to change the dosage of medications that keep your heart beating, ones that keep you from going into a diabetic coma, ones that keep the seizures away, and about a hundred more. I have to keep the dose limits and how much I can change things around in my head. Otherwise, someone could die. 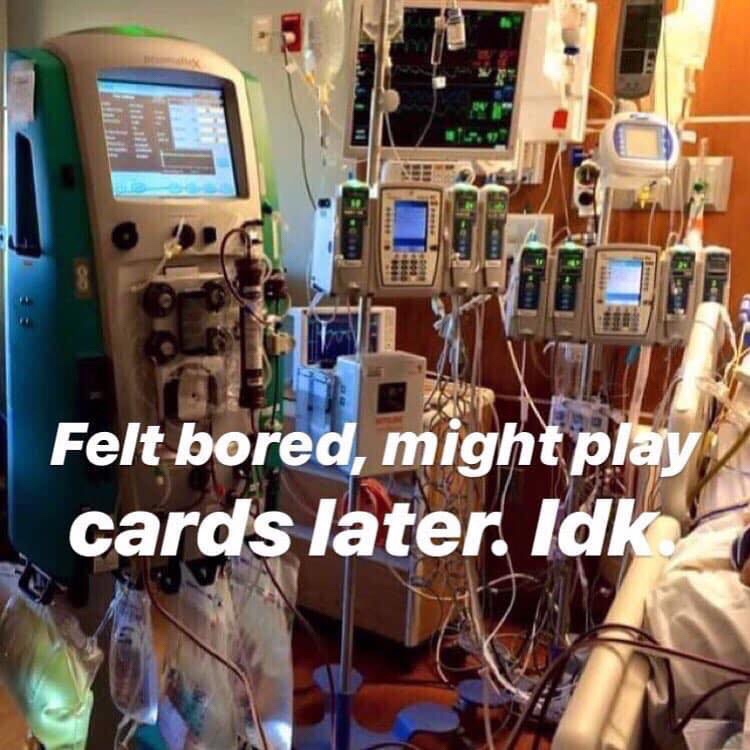 I found this funny meme on the internet. I showed it to my husband. He said skeptically, “I’ve never seen that many machines in a patient’s room. Look, there are seven of the same machine!”

I rolled my eyes and explained, “that’s an IV pump. We infuse multiple medications at once. I had that many machines in a room the last time I worked!”

See, my husband is married to a nurse, but even he didn’t realize how crazy things got. With that in mind, I didn’t go to lunch at [11]. Yep.

I was going to go after the sedating medicines were turned off and the patient woke up a bit more. That was the plan. Just run down real quick. My lunch buddy, the person who would assume care of my critical patients while I raced to grab a sandwich before the cafeteria closed, she [sic] had just gotten a new admission. Way sicker than mine. By a little bit. She said she could handle watching my people too.

But just as I was about to tell the charge nurse my plan, the doctor decided we needed to do a bedside procedure. I gathered the supplies, I gathered the required paperwork. I even gathered a collection of coworkers to help me turn the patient for the procedure since he outweighed me by over 150 pounds. I drew up the dangerous medications, ones that require special training and education to administer. Then I waited for the physician. He had gotten called to another patient.

I thought I’d go to lunch after the procedure. That was the plan. I had taken care of all of my patient’s needs for the time being, and I wanted to grab some grub. I was starving!

Then CT called. That’s where they do radiographic scans. The doctor had ordered a STAT CT. Stat means right then. Pretty important. Life and death stuff. Something about a possible brain bleed. So yeah, no lunch for me.

You see, I had to go down to the test with my patient. Cause he was that sick. Someone had to control those life-sustaining meds. Someone had to watch the heart monitor. The someone was me. I had to coordinate with my Respiratory Therapist since the patient couldn’t breathe on his own yet. Yeah, we had to breathe for him, as we rolled down the hall, pushing rolling machines alongside him through narrow passageways and onto an elevator just big enough for an ICU bed.

Good thing I’m so skinny from starvation, I thought, as I stood pinned behind an IV pole up against the wall.

Funny story in the elevator, though. My Respiratory Therapist hadn’t eaten lunch either.

After the CT. After the transport. Then I’d take a break. That was the plan. But you know how plans are. They’re like pie crust promises. Easily made, easily broken.

My patient’s wife had arrived bedside in our absence. Poor dear. And I mean that from the bottom of my heart. She was so worried. He had been sick for so long, so unexpectedly, and we didn’t really have any answers. I thought of how I would feel if my husband was in that bed. My heart broke for her. I spent extra time explaining in detail everything I could. I offered her emotional support. I offered her hope based on my knowledge gained through the years. I hugged her and held her while she cried. I mean, who could go to lunch with that going on?!

I got to eat, though. Eventually. The hot line was closed, but I grabbed something. I had clocked out for lunch, and after giving directions to a lost family member in the hall, then letting a patient transport take the elevator before me, I had a good [10] minutes to eat. I loved every bit of those [10] minutes. I reveled in those [10] minutes. I mean, I got [10] minutes. Ten glorious minutes! I had started to think I would not.

You know what I didn’t do in my [10] minutes of break throughout my [13-hour] day? I didn’t play cards! Ain’t nobody got time for that.

Sometimes nurses just long for a drink of water. We can’t have it at the nurse’s station, though, and we don’t really have the time to drain the urine that coveted drink of aqua would create. So, we don’t think about poker or gin rummy. We think about if it’s worth sucking down that styrofoam cup of water when we know we’ll be running the hall later holding our bladder beyond what’s healthy. We just wanna pee. Are there decks of cards in the bathroom?

And it’s not just me, an ICU/CCU nurse. It’s all of us. Nurses. We’re all stretched beyond what we can handle sometimes physically, mentally, and emotionally. We’re all stressed out, with sore backs, and missed family get-togethers. If we happen to have a cold day in hell, pigs are flying, and we can break out into a card game in the break room, then we darn well deserve it. I mean, I’ve never seen it, but if you do… I mean, miracles happen. If you do catch a card game, maybe you could grab us some snacks to go along with it. After all, we love food! It’s like the Holy Grail of Nursing. Many seek it, but few find it.

Next time, consider my very normal and common day before making some ridiculous future comment.